How Far: 10k (though endless scope for variation)

Terrain: Paths & tracks over grass & limestone with some tarmac.

We all have favourite runs and areas. Places we know so well but always seem to draw us back. There is always the chance of some undiscovered view or new quality of light that promises to completely change the way you see your old faithful hill.

For me, over the past couple of years, it has been Scout Scar above Kendal.
It’s not high and it’s not far but it packs a punch. When I say punch, I don’t mean in a Wansfell “But-this-is-only-a-little-hill-above-the-highstreet-how-can-it-be-this-hard!?” sort of way but in terms of the quality and clarity of its views, the variety and character of the landscape and the sheer immediacy of your escape from the world below.

All the ascents are runnable, great for training, while the level escarpment above provides fast and sometimes technical trails to while away an evening. 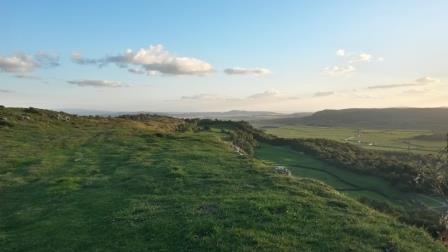 Being perched as it is above the A591, it marks for many the final run into the Lakes; past Kendal and on to Windermere and the crowds of Ambleside and further north. Often overlooked in the rush for higher tops and tickable summits, these lowly lumps remain relatively tranquil, even at the height of summer bank holidays, while a few miles up the road Fairfield and Loughrigg groan under the weight of Vibram and Gore-tex clad souls.

But it is Scout Scar’s position away from the higher summits that makes it an ideal option for on the way home after a weekend of running further north. While the rest of the park languishes under showers and gales, you can smugly look over the intervening valleys and enjoy views east over the Howgills and Yorkshire Dales, south over Morecambe Bay to Blackpool Tower, with the Forest of Bowland looming ever-moodily between. It has long been a local favourite and was even graced by the boots of Wainwright himself for his Outlying Fells guide. It is also the summit of choice for the Kendal Mountain Festival 10k Trail Race and the first race in Kendal Winter League.

From Kendal, the ascent is never taxing (ideal after a weekend spent on steeper ground!) but instead allows time to enjoy the transition from lush, green pasture land to the sparse beauty of limestone uplands. Stunted hawthorns, purple heather and clumps of bright bracken dot the escarpment, lending a feeling of wildness well beyond what you would expect from the diminutive height and close proximity to Kendal.

As you progress further up and over the plateau, a surprise awaits; Scout Scar itself is an impressive limestone edge that extends along much of the length of the hilltop and allows views west to drop away dizzyingly, across the beautiful Lythe and Winster valleys towards Gummers Howe, above Windermere, beyond. 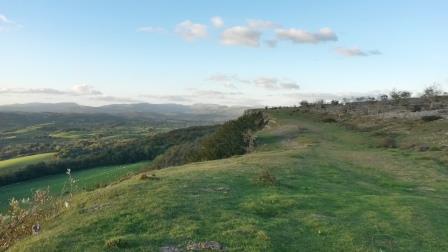 Along from the summit is the imaginatively named Mushroom, a round-topped shelter with a nicely engraved 360 degree mural of the skyline, complete with names of principal summits, an ideal spot to stop and do some strertches/catch your breath). From here it is a short run down to the road and carpark, an ideal start and finish point for those wanting a quick hit without much ascent.

For those keen for more, a small path leads round the back of the carpark, and takes you across open ground and the impossibly twee sounding Gamblesmire Lane (one of the many old bridleways and drover’s tracks that criss-cross the hills).

Follow Gamblesmire Lane right back down the hill to Kendal or else press on and be rewarded by views from Cunswick Scar. Cunswick is a small subsidiary summit to the north of Scout Scar that is even quieter than its neighbour, with a large stone cairn to mark the spot. For me, this is the place to pause and look out across the panorama of the lakes (providing it’s clear).

From Black Combe in the west to the Kentmere fells in the east, this is surely one of the finest views around. Not that the views to any point of the compass aren’t just as arresting but if we’re honest, it’s this spread of peaks that keeps us coming back.

From here it is a leisurely descent down through fields and the golf course back to Kendal where tea and cake will fortify you for the drive home!

Detailed description:
Scout Scar is criss-crossed by numerous paths, some official and marked on local maps while others are old love-lines which feet have followed instinctively for generations, there is ample opportunity for exploration. 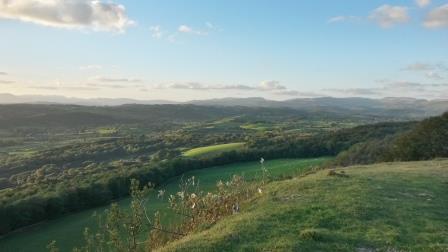 For me, the the best way to enjoy the Scar is from Kendal town centre, heading uphill via Captain French Lane, Gillingate or Beast Banks. Follow the Brigsteer road up and over the A591, the road then turns left. It is this steady but fairly relentless ascent that spreads the field at the start of the KMF 10k.

After a hundred metres or so there is a stile in the wall to the right. Follow the path beyond across the old racecourse and through the wall on the other side. Wind uphill following the broadest path until the incline eases and a large pile of stones marks the path north to the summit.

The Scar is grazed by a herd of long-haired Welsh Black cattle which seem friendly enough but it might be worth keeping pooch on a lead.

Follow the path past the trig point, through the wall and on to the Mushroom which comes into sight soon enough.

From here descend northward and then west to the road, cross it and take the small path right of the carpark. Follow this through a wooded area, past the aerial tower and to fields beyond. 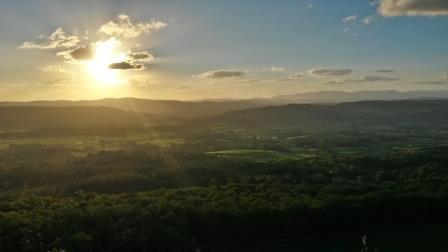 Across these to Gamblesmire Lane, if you’ve had enough, descend here back to town or else (much more interesting) carry on with the wall to your left and follow the undulating path to its terminus at Cunswick Scar.

Turn around and after 20-30m take the left fork through fields, over the A590 and through the golf course.

Pick a path on the other side and wind down the rough ground, following good paths all the way, until you reach the former tram way, now metalled, road down to Queen’s road and then keep your nerve down steep cobbled streets and hidden alleys down to Kendal town centre, usually joining Beast Banks.

Or alternatively, head rightward across the rough ground to Serpentine Woods for fun single track paths that wind through the trees and pops you out near the much favoured Rifleman's pub and at the top of Gillinggate and Captain French Lane, near the run's start.

As ever, map and compass and the knowledge of how to use them are essential, even when this close to town. I have had more than one experience of being disorientated and alone on the top of the Scar in thick cloud and rain, especially in low light after work! 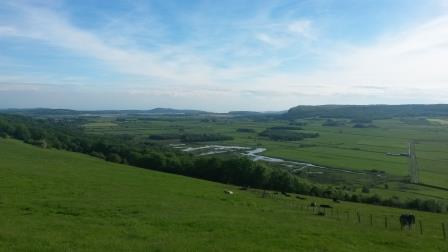 There is endless scope for variation, extension and contraction; head south from the summit to reach the picturesque Helsington Church and Lumley Fee Bunkhouse. West from here will take you down bridleway descents to Brigsteer and the Wheatsheaf pub or else east to the grounds of Sizergh Castle and tiny Sizergh Fell.

Head south and west from the summit for great steep, single track descents to the woods above Brigsteer.

If you are feeling fresh, follow Gamblesmire Lane north and west to link up with trails leading to Staveley and the Dales Way.

Or if the northern end appeals, descend from Cunswick Scar to Cunswick Tarn to see herons and ducks feeding in tranquility among the reeds. Across fields from here you can loop back to Brigsteer or north to Staveley. 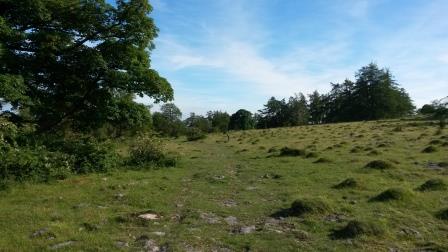 There is even a 30km loop from Kendal, over Scout Scar, west across the Lythe Valley to another favourite hill; Whitbarrow Scar, the sister hill of our own Scout. Run the length of this southwards to one of the best descents in the area and pop out at Raven Lodge for the long, flat eastward return leg through Levens (essential refreshments available in the Hare & Hounds) and join the river Kent, back north to Kendal.

All these options cover a mix of stony bridleway, grassy paths and tarmac. In dry conditions, I will often wear a road shoe but generally a light trail shoe is the best option, try the Asics Trabuco 5 or Salomon Sense Marin. In wetter conditions, the limestone can be quite slippy but the main thing to look out for is the odd muddy patch, maybe then use the Inov-8 Roclite.